How High is the Office Vacancy Rate in Calgary?

Posted by Michael on November 30, 2015
Uncategorized

If you have been downtown in the last few months you might have realized that traffic isn’t as bad as it used to be. This can be attributed to the fact that thousands of people have lost their jobs since the price of oil went into the tank, and rumour has it that there will be more layoffs in January. Of course this frees up a lot of office space which companies will try to sublease to other companies to at least recover some of their cost on a long term lease.

While you were downtown, you may have also noticed that despite all the doom and gloom in the energy business, there are a lot of construction cranes still working in the skyline. Some of those are working on residential condos which are still selling at a reasonable pace, since people still need a roof over their heads and apartment style condos tend to start at the lower end of the price scale. However there are several office building under construction that were started before the collapse in energy prices, so they have to finish them no matter what the market is like. I believe the rule is that once you are out of the ground and above street level, you must complete the building. This is a great requirement since it would be a real eyesore to have a building that is half finished sticking out of the ground for what could be years until the market improved. 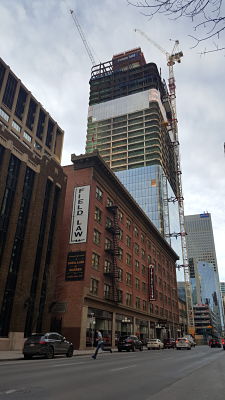 Some of the buildings that are under construction are

So, now you can see that vacancy rates have nowhere to go but up when you combine all the job losses and new construction coming on the market.

According to “Calgary Economic Development” the downtown vacancy rate was 91.% in the third quarter of 2014 and has jumped dramatically to 14% in the third quarter of 2015. Many real estate experts expect the rate to peak at around 18% near the end of 2016, however some think it could go as high as 25%. Then there is the issue of how much space is leased but still empty? Some companies may have some unused space that they haven’t tried to sublease. Regardless, the vacancy rate is high and going higher.

What effect has all this available space had on leasing rates? According to some real estate brokers, rental rates have declined to 2005 levels and could fall even more. The silver lining in all that is that smaller businesses might be able to return to the downtown core now that rates are more reasonable. Rates were so high a couple of years ago that even Imperial Oil and Canadian Pacific Rail moved into the suburbs. Calgary could also attract other head offices in different industries now that all the premium space is available at bargain prices.

Even with all the bad things happening in Calgary right now, this city will survive and thrive – it always does

1 Comment to How High is the Office Vacancy Rate in Calgary?