Posted by Michael on July 31, 2016
Uncategorized

With the new tallest building in Calgary having topped out and nearing completion, it is becoming very evident that Calgary has a skyline that is much more impressive than most cities with a population of just over a million people. Brookfield place is looking great and helping to fill out the skyline in the middle of the downtown core where it seemed like there was something missing before. Now, from just about every corner of the city, the Bow and Brookfield place are visible and impressive, with Brookfield appearing be just slightly taller. 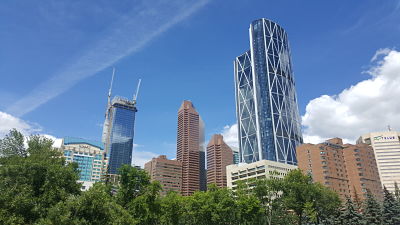 Even with the economy suffering through one of the worst recessions in history as a result of the collapse of oil prices, there is still one more signature building under construction that has yet to make an impact on the skyline. Telus Sky is just making it’s way out of the ground on the corner of Centre Street and 7th Ave SE and will surely be one of the most beautiful buildings in Canada once it is complete in 2017. This building will offer a combination of office space and residential rental units. In addition, the first three floors will contain an impressive atrium along with retail and restaurants. Certainly the office component of this building is not needed right now with the scary vacancy rate in downtown Calgary, but they appear to be proceeding with construction anyway.

If you have done much traveling in the United States, you would know that places like New York, Chicago, and Houston all have very impressive buildings and Calgary’s skyline is a long way from competing with those cities, but that is not surprising since they all have much larger populations. However, there are some very large American cities that have metro populations of over 5 million people such as Phoenix, Atlanta, and Dallas that Calgary can certainly compete with. In the case of Phoenix, Calgary certainly has a nicer skyline, because Phoenix really has very few tall buildings at all. When looking at Atlanta, they do have quite a few nice skyscrapers, but their downtown is too spread out to look really good. Dallas has a nice skyline but you could argue that Calgary’s is nicer, especially once Telus Sky is complete.

Within Canada, there is no doubt that Toronto has the most impressive skyline with the 5 tallest buildings in Canada and the CN tower. They have some really nice buildings and they keep building nicer and taller condo towers, so  they will be hard to beat for a long time. There is no doubt that Vancouver has a great skyline, but most of that attractiveness has to do with the beautiful mountain backdrop behind the city. If you look only at the buildings in the downtown, it is not nearly as impressive so I would argue that Calgary has the second best skyline in Canada.

Of course, most cities in North America can’t compete with some of the Asian cities and Dubai where they are on a whole other level when it comes to building skyscrapers.